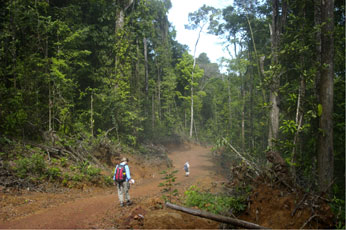 Collecting subaerial algae in the Amazonian forest of French Guiana (2007)

Over the past millions of years the land on our planet has been the testing ground for many experiments or, more dramatically, the battleground for many invasions. A myriad of ancestral plant forms came from the sea and lakes to exploit the terrestrial environment. Those life forms were algae, simple photoautotrophic organisms that eventually prepared the land for the terrestrial flora and fauna that were to follow. They successfully conquered the land in terms of making it a useable new habitat for themselves and developed new forms and processes to adapt. Those plant “invaders” or “conquerors” are represented today by algae living among us populating soils and other terrestrial habitats. 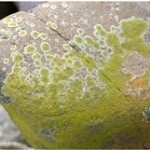 Our laboratory has been investigating the subaerial representatives of the orders Klebsormidiale, Prasiolales, Trentepohliales, and Cladophorales. Molecular systematics and phylogenetic analyses along with morphology-based classification hypotheses have been our tools to unravel biological and evolutionary trends. Gene sequencing techniques and computerized data analyses of nuclear and plastid genes as well as ultrastructure has been used in this research. My particular interest in the Trentepohliales is centered in the phylogenetic relationships among the genera and species as well as the species concept in the order. We are investigating the taxonomy and systematics of Klebsormidium by a combination of morphological studies and sequencing of the rbcL gene. Our results so far indicate that a great deal of genetic diversity is hidden behind the simple morphology of these subaerial microchlorophytes, and that the current concepts of several common species will probably need to be reassessed. Biodiversity surveys are also part of our current interest, in particular from tropical rainforests. A comparison with other tropical regions is showing that our floristic accounts are very high figure. Thus, we have able to conclude that French Guiana and Panama are biodiversity hotspots for subaerial algae. 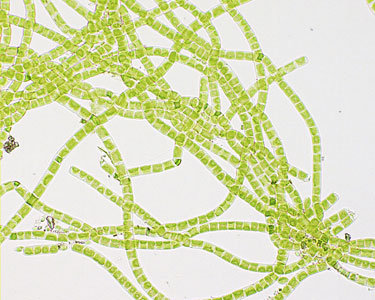 The genus Klebsormidium P.C. Silva, Mattox & Blackwell is one of the most widespread taxa of terrestrial and freshwater green algae in the world. The range of habitats occupied by this genus is exceptionally wide and includes rocks in streams and rivers, bogs, bare soil, sand dunes, litter at the base of trees, tree bark, exposed rocks in plains and mountainous areas, golf courses, seepage rocks, stone monuments, bases of urban walls, asphalt roof shingles and iron rails. At the bases of urban walls, Klebsormidium may produce dense populations recognizable as light green patches or belts. Recent studies have also shown that algae of this genus can be a cause of biodeterioration in ancient historical buildings and other monuments.

We are investigating the taxonomy and systematics of Klebsormidium by a combination of morphological studies and sequencing of the rbcL gene. Our results so far indicate that a great deal of genetic diversity is hidden behind the simple morphology of this genus, and that the current concepts of several common species will probably need to be reassessed.

The Prasiolales is a widespread group of green algae common in cold temperate and polar regions, which includes four genera (Prasiococcus, Prasiola, Prasiolopsis and Rosenvingiella). Several features make them an exceptionally fascinating algal group from an evolutionary and ecological point of view: 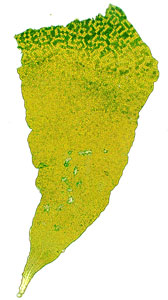 1) The range of life history patterns observed in the Prasiolales is incredibly wide: no other groups of algae are known to encompass so many different types of life history! Some species reproduce exclusively by fragmentation or other forms of vegetative reproduction. Other species have an asexual life cycle, in which the thallus reproduces by non-motile spores, which regenerate the same generation. In other species, the spores produce a reduced, unicellular generation (aplanosporangium), which also produces spores (that will reproduce the thallus). Finally, some species have sexual reproduction. In some species of the genus Prasiola, such as Prasiola stipitata, the mechanism by which the sexual reproduction takes places is exceptional: the reproductive parts are produced after somatic meiosis. The parts of the thallus that undergo somatic meiosis are haploid and occur directly on the top of the diploid thallus; they effectively represent a specialized gametophytic generation. At maturity, they show a characteristic elegant patchwork habit, in which the light parts produce the male gametes and the dark parts produce the female gametes.

2) The ecological range of these algae is also exceptional: the Prasiolales are one of the very few algal groups including marine, freshwater and terrestrial species. Some species are exceptionally tolerant and eurhyaline. Rosenvingiella radicans, for example, grows equally weel in culture media for marine and for freshwater species. In the past, one of us (Dr. Fabio Rindi) has been able to isolate in culture a strain of this species using a sample which had been pressed and kept in darkness for three months.

3) The Prasiolales are very nitrophilous organisms. They are able to use efficiently organic nitrogen and grow profusely at dirty sites, subjected to large amounts of nitrogen as seabird guano, animal urine or other forms. Prasiola crispa is the most common terrestrial alga in Antarctica, where it typically grows associated with the nesting sites of penguin colonies. Rosenvingiella radicans is very common in urban areas in northern Europe, in parts of the continent with a cool and humid climate. It is most frequent at the base of trees, corners, walls and other sites that dogs use as signal posts. 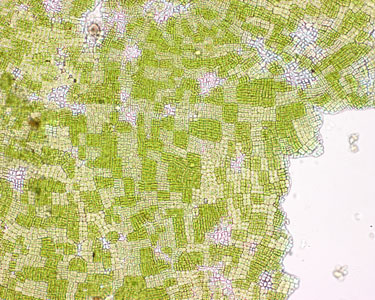 We are investigating the taxonomy and phylogeny of the Prasiolales in collaboration with several colleagues (Dr. Lynne McIvor, Dr Alison Sherwood, Prof. Thomas Friedl, Prof. Michael Guiry and Prof.
Robert Sheath) by a combination of morphological observations, culture studies and sequencing of the rbcL and 18S rRNA genes. Our results have confirmed the distinctness of the genera Prasiola and Rosenvingiella and have shown that the genetic differentiation in Prasiola is based mainly on ecological basis (three main clades were found corresponding primarily to marine, terrestria land freshwater species).  The molecular data led to the exceptionally interesting discovery that Trichophilus welckeri, an endozoic subaerial alga growing in the fur of sloths in the Amazon Forest, is strictly related to the traditional Prasiolales and is the sister taxon of Prasiolopsis. Since the morphology of this alga differs considerably from the classic prasiolalean genera, and no subaerial forms of Prasiolales are known from tropical regions, this was a very unexpected conclusion. Which, once again, highlight what great evolutionary surprises can be found with detailed investigations of the subaerial algae of tropical rainforests! 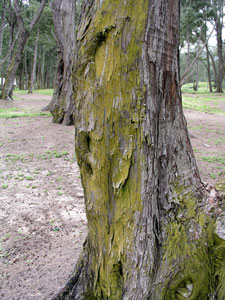 In the course of the studies on the Trentepohliales, an exciting and unexpected discovery was made. Many coastal trees on the beaches of the windward side of O’ahu are densely colonized by a microalga forming a bright golden-yellow coating. At first glance, this is the typical color of the Trentepohliales, and the local botanists thought that the alga involved was a species of Trentepohlia or Printzina. After careful microscopic examination, however, it was revealed that the coating is produced by a unicellular green alga with a very unusual pattern of cell division. This consists of a budding-like mechanism, which has so far been reported only for the genus Marvania, and one species of Stichococcus, S. ampulliformis, algae belonging to the Class Trebouxiophyceae. However, other features in our unknown alga, such as habit of the chloroplast and other morphological features, were not in agreement with the habit of these entities. It was obvious that this alga was an undescribed taxon of uncertain phylogenetic affinities.

An analysis of sequences of the 18S rDNA showed unequivocally that this novel alga, from two populations of O’ahu, is not related to either Marvania or Stichococcus, and is unquestionably a member of the Cladophorales/Siphonocladales lineage of the green algal class Ulvophyceae! We have described a new genus and a new species based on it: Spongiochrysis hawaiiensis (Rindi, Lopez-Bautista, Sherwood & Guiry 2006). The most intriguing aspect is that this group (Cladophorales/Siphonocladales) was previously known to include marine (mostly) and freshwater species with more or less complex multicellular thalli. Our discovery was therefore exceptional, with highly interesting evolutionary implications:

a) We discovered the second known lineage in the Ulvophyceae representing a successful colonization of terrestrial environments (the other one is the order Trentepohliales), and adds a new lineage to the series of conquests of land that took place separately in the green algae!

b) From an evolutionary point of view, the basal position of Spongiochrysis hawaiiensis in the Aegagropila group is intriguing to say the least: species in this group are basically distributed in freshwater habitats, differing strikingly from all other taxa of the Cladophorales/Siphonocladales complex, which are principally marine! And here is the twist to the story: the closest taxa to Spongiochrysis, C. conchoperia and Wittrochkiella lyallii are found in unusual habitats: W. lyallii is found in fjords with low salinity and C. conchoperia only grows on shells of the snail Lunella coronata in the upper intertidal zone of the coastal environment. 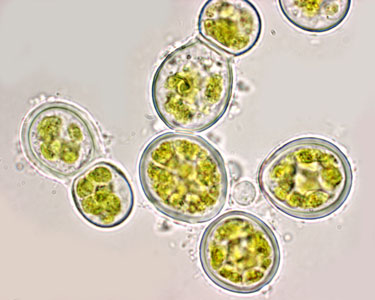 Our interpretation is that these algae are adapted to tolerate salinity variation, and their habitat is in fact intermediate between strictly marine and freshwater. Their intermediate phylogenetic position may represent a step between marine to freshwater habitats. Our data suggest that a marine ancestor, presumably similar to C. conchoperia gave rise to Spongiochrysis through gradual reduction of the thallus and by the production of protective carotenoid pigments against photooxidation.